Everyone seems to love an Advent Calendar.  Just a children’s thing in the past, they’re now being especially marketed for adults too.  From being a simple tool for counting down to Christmas, they first became more fancy with chocolates behind the doors.  Now you can buy them with lego, cosmetics, alcohol, jewellery, and a multitude of other items to be revealed and enjoyed each day.  Just as with the telling of the original Christmas story bit by bit, so every daily surprise is a promise of what’s to come on Christmas Day.

It’s thought that the idea started in 2015, when Canadian Julie Van Rosendaal appealed for donations for her local food bank in place of Advent Calendars.  That same year, in the UK, South Shields resident Louise Scott pledged to donate an item a day in Advent to her local homeless shelter.  A number of charities have since taken the idea onboard but, if none in your local area have, why not just pick a local charity, collect some appropriate items (maybe ask the charity what they most need), and then arrange to deliver them just before or straight after Christmas?

Ideas of suitable charities include food banks, homeless day and night shelters, women’s refuges, organisations that help the vulnerable, centres for seafarers far away from home – sadly, the list is endless…..

Depending on the cause you’re supporting, suitable items could include:

Reverse Advent Calendars can help introduce children to the joy of giving. They can also be an antidote for all of us to what some feel is the increasing commercialism of Christmas. And they can help emphasise that we all have a role in making change happen, and in being kind to those around us. 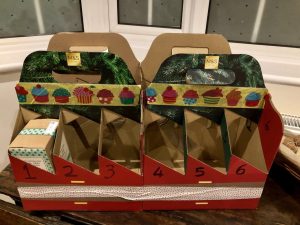 Image: from Twitter where @LucindaBassett upcycled wine carriers for her Reverse Advent Calendar