Change is all around…..

Well, we’re just over half-way through the year.  I wonder how many of your hopes and fears from the New Year are still with you?  How many of them have come to fulfilment, whether it was something that you hoped for or something that you feared?  Whatever’s happened to your New Year thoughts, I’m guessing that this year has turned out to be very different to what you imagined.  Although the first case of coronavirus was reported to the World Health Organization (WHO) in December, and we soon saw news stories about the disease spreading, I’m guessing very few of us imagined what would face us all within a matter of weeks.  So much has changed, especially since mid-March.  And we’re in a huge time of change now, as we’re led through the process of reopening this and that part of our life, of trying to get back to some sense of ‘normal’.

I’ve talked and blogged about change before, and mentioned the oft-quoted phrase that

“the only constant in life is change”.

Many think of this as a modern management speak thing, but it was originally said by Heraclitus – an ancient Greek philosopher who lived around 500 BC.  So change isn’t new, and we all face changes every day.  Sometimes we fear it, sometimes we yearn for it.  But however we feel about it, it will happen.

In the end, it’s not the circumstances or the changes that dictate how our lives go, but rather how we handle those changes and disruptions.  No matter the change we experience, how we embrace that change will forever impact how we are able to live with the change.

There’s about to be a change on CompassFM, which is where some of my blogging thoughts have also appeared.  One aspect of that is that I’ve done my last Sunday Reflection for them.  I’ve no idea what the listeners think of that, but I’m rather sad.  I obviously couldn’t see those who listen – just like I can’t see those who read my blog posts.  I don’t even have any idea who listeners/readers are, but I will miss the listeners – I plan to continue the blog posts.  I’ve moved house a lot in my adult life, mostly for work related reasons, and one of the things I’ve always tried to do is never to say “goodbye”.  I’ve always liked the fact that both the French “au revoir” and the German “auf wiedersehen” both mean “until we meet again”, “until we see each other again”.  And this highlights for me something that is very important – endings are also beginning.  And as American author John Irving said

“You only grow by coming to the end of something and by beginning something else.”

In thinking about “auf wiedersehen” adn farewells, I’m reminded of the song “So long, farewell, auf wiedersehen, good bye” from the Sound of Music.  When the von Trapp family sang it, they were facing huge changes.  They were scared about both the ending and the beginning that they were facing.  Their true story isn’t quite as schmalzy as the movie but they really were facing change.  So as we face the minor changes of things like no more Sunday Reflections on the radio, as well as the major changes going on in our lives at the moment, remember what Martin Luther King Junior very wisely said

“Faith is taking the first step even when you don’t see the whole staircase”. 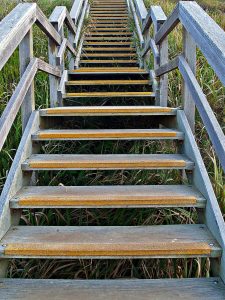