Standing up for what’s right

Martin Luther King Jr Day is observed on the third Monday of January each year.  This is near to King’s birthday on 15th January.  It’s a date that’s much more well-known in the USA but, in recent years, there’s been a growing interest in the UK too.  Martin Luther King Jr. frequently spoke out about standing up for what you believe to be right despite opposition in society – so perhaps that’s why people in other countries have become more interested recently.

I’ve always tried to stand up for what I believe to be important, but it’s not always easy, especially when you feel like a bit of a lone voice.  And doing so certainly doesn’t make you popular, as many people both locally and throughout history can testify.

A number of years ago, I was privileged to visit South Africa.  Although it was holiday, and included some fun things, it was also in some senses a pilgrimage as we visited places like Soweto and Robben Island.  These were places that I’d previously only been able to imagine what they might be like.  I say it was a pilgrimage as these are special places in my life-story because I was one of many around the world who took an active stand against apartheid.

It was an amazing experience to be shown around the prison on Robben Island by a former political prisoner who’d been there at the same time as Nelson Mandela.  And then to be shown around Soweto by someone who’s lived there all his life and so fully experienced the difficulties of living in a township. And also to engage with a taxi driver trying to come to terms with the fact that 18 years after apartheid officially ended (as it was at the time of my visit) he still lived in what most of us would call a shack.

Each of these 3 men had a serenity about them that I’ve rarely experienced before.  They’ve been through so much and come out the other side, apparently better for it.  They were also each grateful for the actions that people around the world had taken on their behalf.  They each said that they were indebted to people who’d spoken out when they themselves had no voice.  As well as finding this humbling, it gave me fresh energy to stand up for those without a voice of their own.  An energy that I’m reminded of every time I think of them, and of people like Martin Luther King Jr.

We all have a duty to do this for each other.  As Martin Niemöller, a Protestant pastor in 1947 Germany, said: 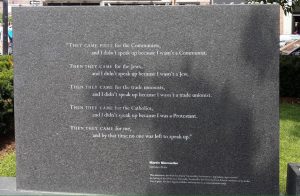