Today is Holocaust Memorial Day.   A sombre day when we remember the 6 million Jews who died in the Holocaust, and in Nazi persecution, as well as subsequently in Cambodia, Rwanda, Bosnia & Darfur.  It’s always kept on 27th January as that date marks the liberation of Auschwitz-Birkenau, the largest of the Nazi death camps.  It’s particularly poignant this year as 2020 marks the 75th anniversary of that event.  The theme of this year’s Holocaust Memorial Day is ‘Stand Together’ so there’s quite a few links between this and my previous blog post last week…..  http://www.faithatwork.info/2020/01/21/standing-up-for-whats-right/

75 years ago Eva Schloss awoke at Auschwitz Birkenau.  The Nazi guards had abandoned the concentration camp, forcing most on a death march.  Eva was 15 years old.  These are her own words, remembering that day:

“When dawn broke we were already deep in discussion about what to do and where to go.  The conversation went round and round for what felt like hours.  Suddenly, the door to the barrack flung open and a woman shouted, “There’s a bear at the gate – a bear!”  This seemed unlikely, but in Birkenau anything was possible.  Nervously we made our way down to the entrance and peered at the peculiar sight.  Indeed, there was a ‘bear’.  A large man covered in bearskins, staring back at us with the same startled expression. Perhaps I should have been more cautious, but all I felt at that moment was unrestrained joy. I ran into his arms, and hugged him.  The Soviet forces had arrived to liberate us”.

75 years since Eva’s hug at the gates of Auschwitz, we are called to stand together with other people of goodwill in memory of the Holocaust and subsequent genocides.  Our collective remembering can be a powerful declaration that the stories of those who were murdered and those who survived – sometimes purely because of the courage of others – will not be forgotten.

There’s an urban legend which says that the great Jewish violinist, Itzhak Perlman, was once performing to a packed theatre on Broadway, when one of his strings unexpectedly snapped with an audible twang.  The audience held its breath, expecting the end of the performance or, at the very least, a break whilst a new instrument would be found.  But, Perlman didn’t bat an eyelid.  He proceeded to do the impossible – to play the rest of the concerto almost flawlessly on three strings.  In explaining the extraordinary feat after the performance, he is said to have remarked: “sometimes in life, you have to make music with what is left”.

We live in challenging times.  Hate speech and hate crime are on the rise.  Respect for difference appears to be declining.  Our society is becoming increasingly polarised.  So what should our reaction be?  To fight fire with fire?  To match the hateful rhetoric with invective of our own?  No!  I believe that we should look to the heroes of the Holocaust – both the survivors and the righteous saviours.  We should not be intimidated or cowed.  If they were able to make music with what was left, surely we can as well? 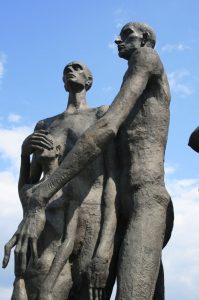