Trees, faith, and the environment

It is one of the four different ‘new years’ marked in the Jewish calendar.  Together these celebrate the ‘birthday’ of the year, trees, kings, and animals.  The reason for needing a ‘new year’ for each of these is that Jewish law specifies that certain things can happen only after certain anniversaries.  In the case of Tu B’Shevat, the Law forbids Jews to eat the fruit of new trees for the first three years after they’re planted.  And then a tenth of the fourth year’s fruit is given to the Temple.  Obviously trees are planted on all sorts of dates, so a date was fixed which symbolically represents the birthday of all trees.  It’s a bit like companies fixing a date as the beginning of their own financial year.

To celebrate Tu B’Shevat, Jews eat lots of fruit, particularly the kinds associated with Israel.  Fruit trees were awarded special status in Jewish culture because of their importance in sustaining life.  They’re also seen as a symbol of God’s favour.  Some Jews also plant trees to mark this festival.  For environmentalists, it’s viewed as a festival that makes connections between ancient beliefs and contemporary ecological issues.  A day that educates about the long-held tradition of responsible stewardship of God’s creation, and raises awareness about the need to care for the environment.

There’s much talk of the environment nowadays, from David Attenborough alerting us to the dangers of plastics, to Greta Thunberg urging us all to action, to people saying that the Australian fires and the extreme heat that preceded them are signs of what’s to come.  In the UK in the last two weeks, as well as in the autumn of last year, we’ve experienced huge amounts of flooding – and so many people are saying “we’ve not seen the like of this before”.  Whatever your thoughts on the causes of extreme weather, it is surely right that we do all we can to care for this world that we live in.

On my study wall, I have a picture of a wise old Native American.  His anglicised name is Chief Seattle.  Born in the 18th century, he became known for speaking about everyone’s ecological responsibility.  I’ve been reflecting on some of his words as I’ve watched the news in recent months:

Teach your children what we have taught our children, that the earth is our mother.

This we know: the earth does not belong to man – man belongs to the earth.  This we know.  All things are connected.

When the green hills are covered with talking wires and the wolves no longer sing, what good will the money you paid for our land be then?

To harm the earth is to heap contempt on its creator. 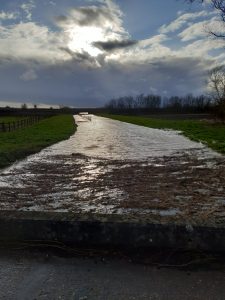