An act of compassion indeed, and it had repercussions.  My father who saw the act said later

“right there I saw that there was something in this God thing.”

Although he didn’t become a saint overnight, it certainly altered his life view.

In the current pandemic, we’re seeing lots of people who are ‘going above and beyond’ whether that be in their keyworker role or as a volunteer in their community, workplace, or elsewhere.  They are certainly obvious by their fruits, but the question remains:

Will we all do the same when the crisis is over and life returns to being more normal? 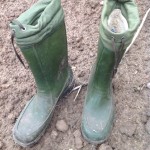